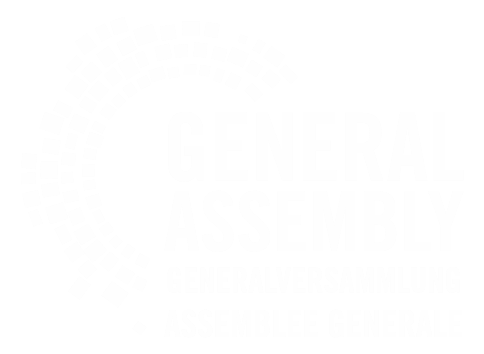 Despite worldwide economic and political implications, there are neither effective legal institutions nor sufficient democratic structures on a global level to adequately regulate the world market, prosecute violations of international law, enforce human rights or direct ecological developments into the right channels. The “General Assembly”, which was being held for the first time from November 3-5 2017 in Berlin, is filling this gap with its concept of an actual world parliament.

With “The General Assembly”, Milo Rau and the International Institute of Political Murder complete their work on the matter of the political and artistic conditions of global realism. From November 3-5 2017, 60 delegates of the General Assembly from all over the world gathered in the capital with the intention of challenging the newly elected German parliament – representative of all those who are affected by German policy but who lack a political voice.

From the labor and feminist movement to Occupy Wall Street to current populism, the demand for adequate representation is constitutive of almost all political movements. This refers to its pivotal but always precarious status in any democracy: who is represented in the political sphere – and who isn’t? When the assembly of the Third Estate declared itself the “Assemblée Nationale Constituante” in 1789, it was a revolution. But what would this General Assembly be today, in the age of globalization – and who would be part of the “Third Estate”? While Europe and the US are debating the modernization losers and underdogs, the proletariat and the shift to the right in their own countries, the General Assembly goes one step further with regard to the global reality of politics and economy, giving a voice to those who are underrepresented, who are not heard, the global Third Estate: labor immigrants, children and future generations, war victims, textile workers, miners, farmers, economic and climate refugees, the victims of the dawning ecocide, the oceans, the atmosphere, animals and plants.

In five plenary sessions, the representatives of the General Assembly debate on where we stand as a global community and what needs to be done – socially, ecologically, technologically, politically. What does political sovereignty mean in the age of globalization? How do the interests of the world’s population relate to the democratic principles of the national states? Whose demands for independence, dignity, and happiness can become the demands of all mankind? A local parliament will be replaced by a global parliament, which urged the members of the newly elected German government to join them.

The first world parliament in the history of mankind, accompanied by a group of international political observers, concluded with the passing of the “Charter for the 21st Century” and the “storming of the Reichstag” on November 7, precisely one hundred years after the “Storming of the Winter Palace”.

"What is global realism?"
8pm, Schaubühne am Lehniner Platz

What are the duties and boundaries of a world parliament in the age of global capitalism, climate change and mass migration? Director Milo Rau and sociologist Harald Welzer discuss social and political justice in the 21st century. Moderation: Doris Akrap

Precisely one hundred years after the legendary “Storming of the Winter Palace”, the newly elected German parliament will be confronted symbolically: What are the demands of the global Third Estate? Who is missing in the Reichstag, where international political decisions have been made by the German parliament since 1999? A reenactment of the historical storming of the Winter Palace in St. Petersburg in 1917 will take place: one of the most influential images in the history of humankind, signifying the beginning of the most momentous revolution of modernity. Let us storm the Reichstag together! Let us create a new, forward-looking symbol of global democracy and international solidarity in the 21st century!

The “General Assembly” is a production of the IIPM – International Institute of Political Murder in collaboration with the Schaubühne am Lehniner Platz, sponsored by the Federal Cultural Foundation, the multi-sector funding Berlin of the Senate Department of Culture and Europe and the Federal Agency for Civic Education and supported by Bread for the World, ECCHR – European Center for Constitutional and Human Rights, medico international, Rosa Luxemburg Foundation and Rainforest Rescue.